How to Build Language Justice 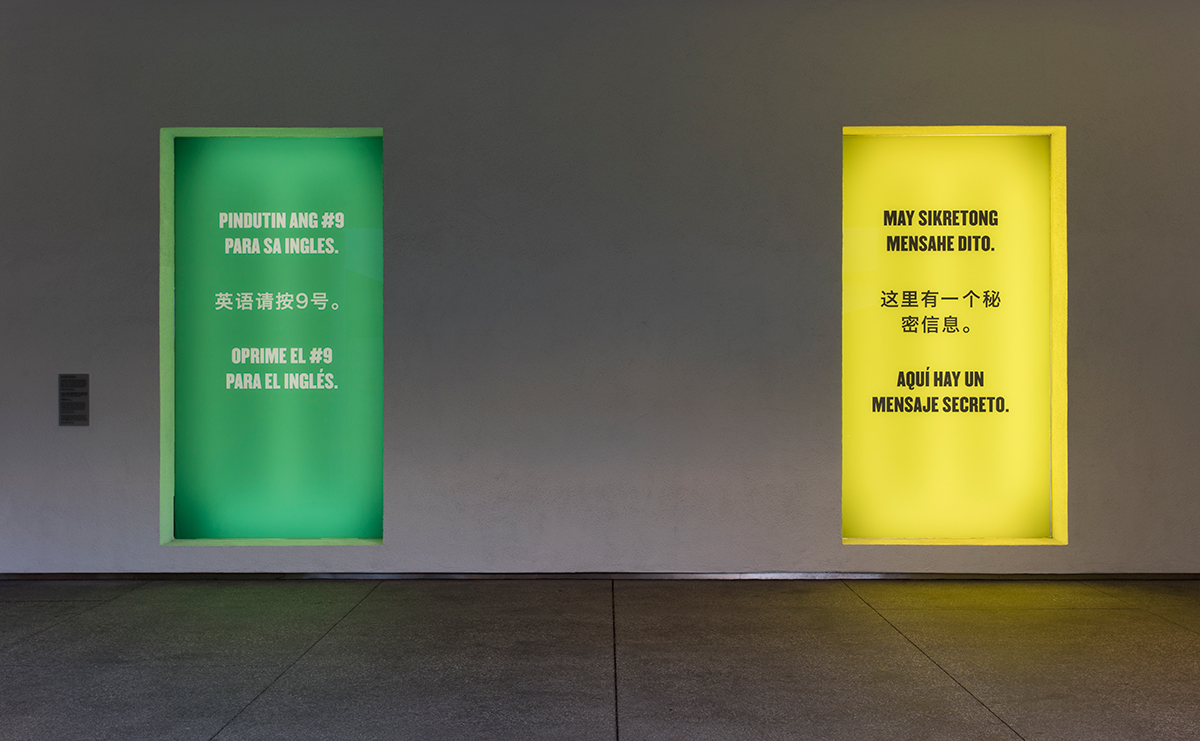 What might we hear, see, feel, experience in a world with language justice?

We would be in a world with room for multiple languages to operate at all levels of society: from the kitchen table to the community meeting to the art museum to the City Council or even the legislature. A world where a vast range of languages could coexist. A world where social structures would not be based on the dominance of one language over all others. A world where interpretation and translation, language acquisition and language preservation are cherished and valued as critical tools for opening communication.

When people are able to communicate together across language difference, all kinds of possibilities can ignite: thoughts, visions, and ideas that might not have been imaginable without that cross-language conversation.

A meeting is held to bring together arts practitioners and arts administrators to infuse post-Trump-election resistance movements with arts and culture. The meeting is advertised in English and the entire event is held in English. There is no interpretation provided or outreach to communities that prefer to communicate in other languages.

A storytelling event geared to tell immigrant stories looking to reach a wide range of communities occurs entirely in English, with interpreters available for people who prefer to listen to the content in Spanish. Any ideas or questions shared in another language take twice as long to express and require an interruption of the conversation, because they need to be interpreted consecutively.

In many school districts, bilingual education initiatives do not teach students to read and write in languages other than English, effectively reducing their literacy in those languages to speaking only.

Despite laws to the contrary, many landlords transmit crucial information, including lease updates, to their tenants in English only, regardless of whether those tenants are comfortable reading and understanding English.

Of the more than 300 indigenous languages once spoken in the land we now refer to as the United States, approximately 175 are actively used today. That number is estimated to drop to roughly 20 in the next three decades, without robust revitalization efforts and allocated funding from governments and foundations.

Linguicism marks some languages as “official” or “professional” or “important” and others as less so. Linguicism results in poorer education, economic, and health situations for people whose primary language is not the dominant language.

Linguicism means being cut off from learning our ancestral languages—the ones we can still access—or experiencing significant barriers when we attempt to reconnect. Eradication of indigenous languages as described above is part of colonial processes, and language revitalization is one important way to counter it.

Linguicism—and the ways it intersects with internalized racism and impulses toward assimilation—means many of us raised in immigrant families were not taught the languages of our families and cultures, so we would not be marked as “other” or “foreign.”

Linguicism means that we don’t see languages other than the dominant language represented “from the front of the room” at all kinds of events, from schools to organizing spaces to conferences to museums.

Linguicism is closely related to racism, classism, audism, and ableism and is also a unique phenomenon, important to understand for the ways it seeps into our world view and everyday practices.

So how do we dismantle linguicism, and what is language justice anyway?

Though cross-language work is as old as humankind, language justice as a framework was born over twenty years ago in the mountains of Appalachia at the Highlander Research and Education Center as organizers and language justice advocates like Roberto Tijerina and Alice Johnson attempted to create a set of practices that would allow historical Black and white populations to organize with more recently-arrived immigrants from Latin America in the Deep South.

As originally developed at Highlander and expanded now by many interpreters, organizers, collectives, and organizations all over the U.S. and beyond, language justice includes the right everyone has to communicate, to understand, and to be understood in our language(s). It entails a commitment to facilitating equitable communication across languages in spaces where no language will dominate over any other. Language justice is based in a respect for the language rights of all people, including people whose languages have been exiled, disappeared, stolen or made invisible through processes of colonial violence. Language justice is a political foundation, a conceptual framework, and a set of tools and practices we can use in organizing and art-making, in our civic life, our interpersonal relationships, our learning spaces, and our imagining and embodying of the world we wish to inhabit.

Language impacts us on a multiplicity of levels. It is a phenomenon that is both intimate and exterior, both familial and cultural, deeply connected to our most private thoughts and on display in all manner of public contexts. We dream in language, we sing in language, we think in language. It is language that makes our lullabies, our stories, our jokes. We use language to name our food, our hometowns, our family members, our friends, ourselves. Language is personal, visceral, and powerful; it is tied to our lands, to our bodies, to our relationships, and to our knowledge. Every time we speak or sign in our particular accents and dialects, syntax and rhythms, cadences and inflections, we identify ourselves and bring social history and personal experience with us. When we come together to dialogue, it is important that we are able to express ourselves in the language that most fully conveys the depth and nuance of our hopes and ideas, our frustrations and questions. And it is important that we feel respected as speakers—not just what we have to say, but also how we say it. For these reasons, strategies for bridging the divides of language are essential to any endeavor that truly seeks to be inclusive of people from different cultures, different backgrounds, and different perspectives.

What might we hear, see, feel, experience in a world with language justice?

More than two dozen working-class families live in a Los Angeles building without rent control. Some have been in the building for more than 30 years, building multiple generations of their families there. As in many neighborhoods across our cities, rampant gentrification tempts landlords with the promise of a different, more lucrative sort of tenant. The landlord piles on rent increase after rent increase in an effort to achieve turnover in his building: eviction by rent increase. The tenants decide to organize to try to stay in their homes. Some speak only Cantonese; some speak only English; some speak only Mandarin; some speak only Spanish. Some speak two of these languages but none of the tenants speaks all of them. They begin holding weekly meetings, organizing actions, sending out press releases.

Houstonians from many shades and backgrounds—particularly African-Americans, Mexican American folks, and more recent immigrants from Central America—exchange stories of survival and disaster response after Hurricane Harvey in a Spanish-English experimental theater production; they trade stories back and forth with ease, though they do not all share the same language.

An immigrant rights rapid response training builds skills among neighbors around responding to ICE presence in their neighborhood, instructing people in their rights and devising mutual aid resources. Some neighbors communicate in Korean; others in Spanish; others in English. Everyone participates, receiving the same information and skills-building strategies. The group is able to talk together about the kinds of response networks that feel most relevant for their particular neighborhood.

In each of these examples—and so many more we have experienced, alongside our compañerxs in our sister collectives Antena Houston and Antena Los Ángeles!—everyone is able to communicate with each other in real time though they do not share a common language, with equal access to all relevant information, using the tools provided by live interpreters, text translation, interpreting equipment, and thoughtful advance planning. The underlying message is that everyone has something valuable to contribute, that all languages matter equally, and that our full participation in the spaces we inhabit is enriched by our capacity to communicate in the language(s) in which we feel most comfortable.

There are crucially important things being said in all languages, by people very different from ourselves, whose contexts and experiences and perspectives are distinct from anything we might have encountered previously. Language justice allows us all to communicate across difference, without erasing difference, but rather embracing and nurturing it. Undoing language dominance is a constant effort, and in that effort language justice is our lifelong passion. We still encounter linguicism and its impacts every day. At the same time, we know language to be a powerful tool for re-dreaming the world and reimagining relationships. We will conjure another world into existence, and that world will flourish in multiple languages. 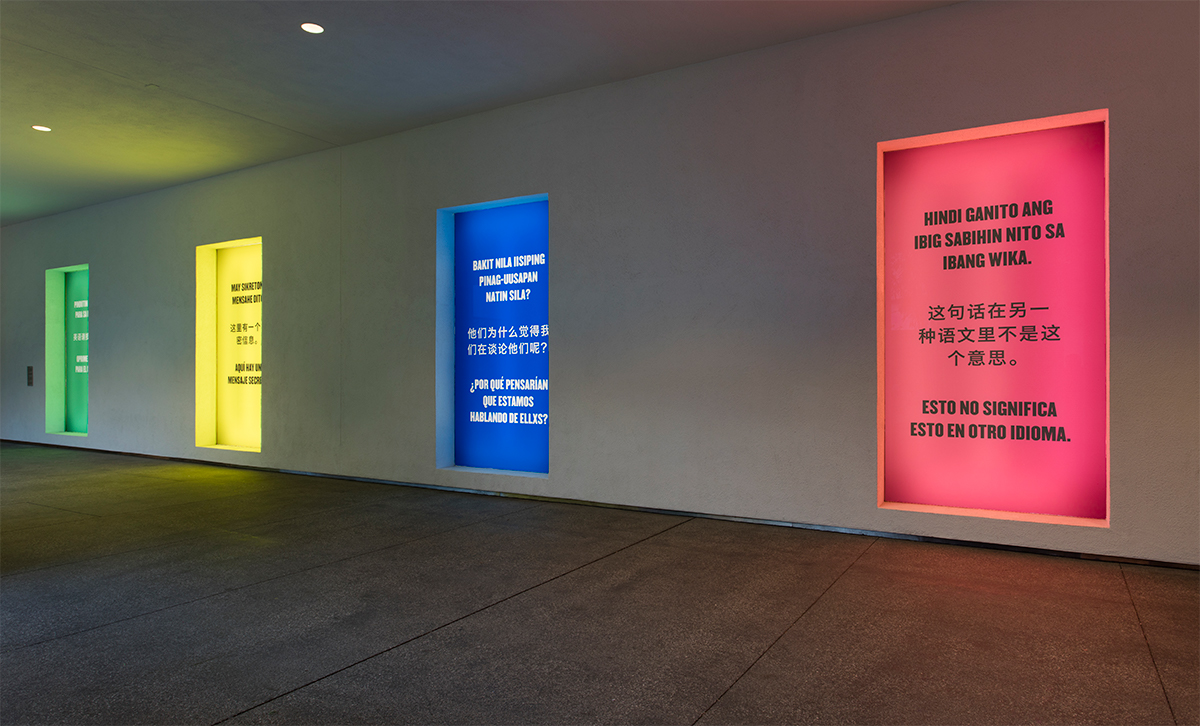 Note: Please consult the Antena Los Ángeles Checklist for Building Multilingual Spaces for nuts and bolts steps to follow to promote equitable communication across languages. To join the LJ movement and/or to read more about this vision for that world and those ways, please visit http://antenaantena.org/libros-antena-books/ and check out the full text of this pamphlet, along with our other Libros Antena Books publications. The full version of this text, along with many others we’ve written collaboratively over the first ten years of Antena Aire, will also be published by The Operating System in the book en el entre / in the between: Selected Writings from Antena Aire, forthcoming in Fall 2020. Thanks to January Parkos Arnall, Interim Senior Curator at the Museum of Contemporary Art in Chicago, for the invitation to update and revise this text.

Dystopia Diaspora Listening with our TonguesIn Peripheral Vision: Two Poems and Some Sentences