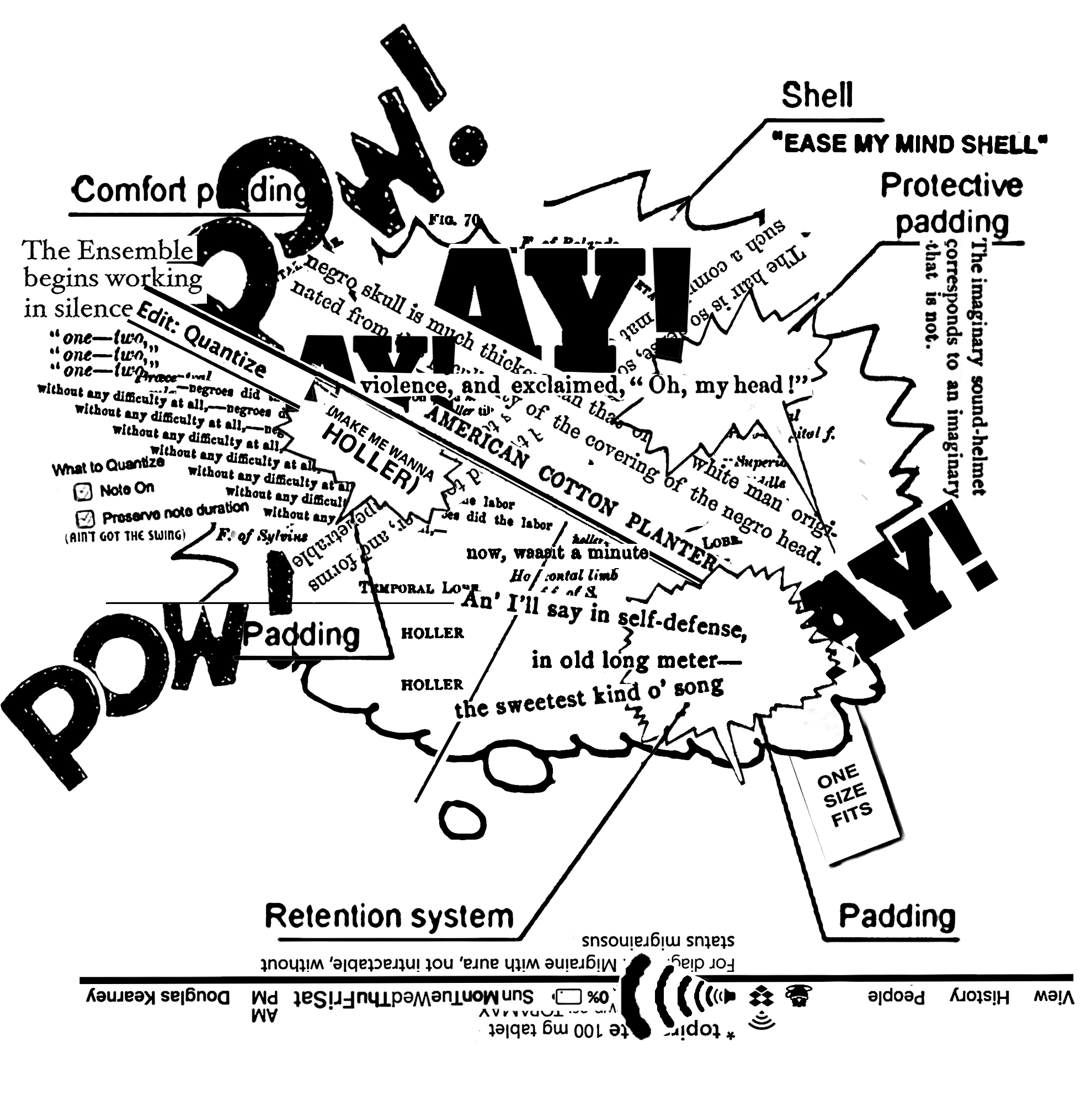 That one is sacred and the other secular might be a stony road in, albeit one what’s well-trod. Only I’m not interested in arguing that the sacred should be displaced from the Black mind via the metonym of the head and what means to protect it. That old dyad of sacredness and secularity is getting played out as a productive one for my mind as it stands, something that closer considerations of soul music—not merely for its generic characteristics, but for what it urges as praxis—is making possible.

Sadly, this might mean binning the joke that to make a Gospel song a Soul song, just swap “Baby” for “Jesus.” But what’s backsliding for if it isn’t to get into pleasures you now know better than?

No, no. I think I shifted from a spiritual helmet to a field holler helmet, because I’ve been thinking about work and its impact on my mind a lot lately. How being mindful of my mind has become another kind of work I’m working on. How these poems, as I described in my previous post,* these more Photoshop-based poems, become deeply personal even when I’m not looking. I won’t get into this now, because some of the poems in question aren’t online. But anyway…

The “field holler” as an act, is deeply personal though it responds to labor meant to abstract the person working it. From what I understand, it’s a proto-Blues, sung outside and not necessarily in call and response. A song in tension with the work—I don’t want to say productive tension, because that would suggest the song was first imagined as an object, but I’m guessing it was more of a process. Once that process became a product (sound recording and, hey there, Lomax), perhaps those sounds became sounds® and sounding them became a kind of audition (the lyrics maybe became lyric in that they turned created in order to be overheard?). I digress.

The field holler is fieldwork that announces the vocalist’s presence and situation even at great distance.

In “Ease my mind shell,” I went consciously for the personal in the last push of the draft. This surprised me. The nakedness of it. But there it is in the poem’s open field.

This work echoes, in many ways, the process that took me from the Black Automaton poems in The Black Automaton (Fence Books, 2009) to “Blues Done Red” in Patter (Red Hen Press, 2014). A process in which I wanted to see whether typographic/visual experiments that felt effective for “public” poems could work for “private” ones. Another dyad that functions imperfectly for me here-lately.

I’m grateful to futurefeed for providing me a place to think through some of this stuff in public and to share some work in progress. Thanks, especially to Ariel Yelen, for patience and careful editing. This is my last post. I’d like to leave you with a passage from a paper I gave responding to a prompt from the brilliant Evie Shockley.

The Blackness of my Visual Poetics. On it, if there’s an it there, and if not, what’s there or near there instead?

It’s essential to put down that I’m not trying to peg-foot toward an essential Blackness. Airea D. Matthews is currently laying shade on that, penning penumbra, umbrage tooken—as one might say—to the bridge and thrown off. Here, I am reminded of a TV spot from my youth for the Black women’s lifestyle magazine Essence: “Essence is you-ou”—this jingle ran, likely round about the same time as the hoodtastic Hey Love slow-jam compilation. “Noooooo my brother, you’ve got to buy your own” cooed the Billy Dee-esque coolbreeze—these two ads, dueted to def on BET, bet, between clips on Video Soul and Video Vibrations. These ads like Jerry and Aretha’s McDLT advert, for us, for us to buy; that is, to buy our own. That essence, lower case, is us in so much as any mascon is simultaneously a mask on and a mask off, which is to say, a mascon or cultural mass concentration’s what we say we recognize when we say we are seeing ourselves seeing ourselves a.k.a. the nod, the that’s the jam, the nahmean.

So if I say there is something Black to the visibility of, say, “But Black, it can’t—,” I mean to mean that I think there is an activity of Black-ass recognition more than I’d reckon a plastic Black precondition. That while a graffitied wall—bombed/tagged/wildstyled—which is the paradigmatic image from which this work up-jumps—is neither unique nor particular to Black cultural spaces alone; that such a wall got bombed on due to several factors—some socioeconomic and some aesthetic which, in some cases, includes intentional, strategic communal participation via a crew of graf writers; that such a wall might exist and might not be painted over because of several more factors arranging and extending the initial ones; that such a wall might not simply be a sign of blight but a signifier of a teeming, an excess of signal, the chirographic equivalent of the raucous-ass knucklehead chorus that is a hip hop posse cut; that I might recognize such a wall with at least two sets of eyes on that word recognize is less about seeing what I figure would be an essentially specious essential Blackness. Rather, it’s this rhetorical doubling of recognize synesthized and synthesized to an encounter with the page that has me thinking of Black visuality vis-à-vis visibility (and vice versa) as Dr. Shockley proposed it.

Visuality: formal aesthetic choices that draw poetry on matters of race and ethnicity into a prioritized relation with visual culture or the visual field.

Visibility: cultural legibility and social representation (how race and ethnicity might be discernibly present in the work, for actual or potential audiences).

I’m saying, the rhetorical construction of recognize as applied to the visual field is where I’m housing something like a working Blackness—which is to suggest to be at work as much as nigrarigging. Recognize: as in know again and as in acknowledge and here I want to resist a primary and secondary ordinance as sequenced in the dictionary, that uh 1 and uh 2. But what I think gets activated in the L.A. vernacular of my gangsta rap youth: You better recognize. Which stages recognize as acknowledging what you already know again lest it teach you what you should know you know.

* My last post allowed me a chance to spend some time discussing opera. BUT, if you’d like more of that, here’s a link to a podcast called Black Market Reads hosted by the wonderful Lissa Jones. We talk a lot here about opera, especially Benbannik, the opera for which I invented a language based on an idiolectic remixing of Afro-diasporic speech-acts and vernacular including Crip Talk, Wolof, and Harlem Jive. Fun!

One of these mornings But, Black, It Can't—