I've been working towards a collection of short form essays in the style of this book that I got in Portland, OR at Powell's Bookstore during my first visit. It is written by the filmmaker Wim Wenders, called Emotion Pictures, 1986. It took a couple of years until I realized that the scribbled signature in the front page is his. Its barely 150 pages, short form writing and a way of writing that almost reads poetically. I've learned a lot from this text in terms of form and structure am interested in trying to use this kind of form in my own way to talk about the range things that I'm interested in. It’s perhaps a loose form of criticism, but to me, it’s just giving some real time to rest on a few things that really move me for better or for worse. I’m aware that there are a ton of books like this, but this is the one that I have and that moved me. I'm a fan of Wim Winder's work but I didn't know that he had a writing practice outside of his films. 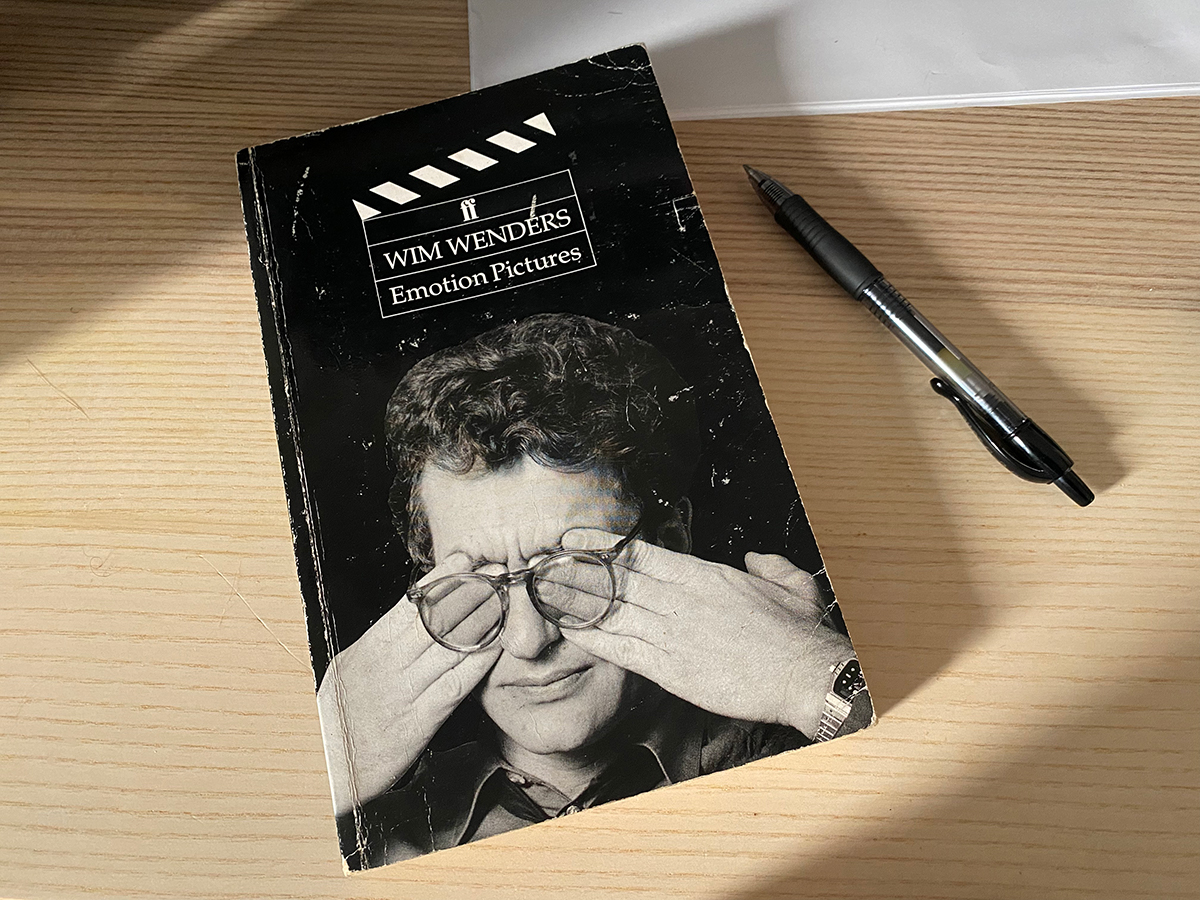 I purchased this book in the fall of 2018 at a moment when I was coming off of one of the more brutal years of productivity that I've ever experienced. I had three shows in New York back-to-back – Eastman retrospective, CLUB, and Shug Avery’s Kiss, I did Skowhegan that summer and then foolishly went right back into the residency thing. I was in Portland for the PICA residency for nearly one month at the Portland Institute of Contemporary Art. This book in many ways grounded me during my stay. It was in that moment that I decided that I really wanted to try to invest in a writing practice. After reading through the book one night I was like, "Oh here's this weird filmmaker, he's writing, maybe I could do this too?"

Writing is the weakest area of my practice. I've always been able to produce texts, when necessary, but there's something deeply disturbing to me about translation when it comes to writing in the sense of how an idea or thought can start to deteriorate as soon as it comes out of your mind and makes its way to the hand. There's this strange thing with writing where I realized I couldn't bypass my own hand as a tool of translation. This is something that I've dealt with in art making in general. Art making is something I do to make language and deep conversation happen with myself first, before having it with others. I often hold things in my head for so long– future length scripts, entire installations projects, essays for years.

You start to place the idea/story/text outside of your mind, that safe space, this beautiful coherent thing that exists in your mind and maybe even in your soul a little bit and then it starts to just immediately disintegrate. It is just the most painful thing. I started to commit to this practice of writing or product making which I equate to purging. I lock in and will push it out.

Whether it be concentrated work for large scale work or it could be a day for an essay. It could be a couple of months for a project where I just can't do anything else but that. I remember starting from that weird place when I was learning how to shape visual images. In 2001, I was starting on the very first iMovie software and Adobe 4.5 learning to edit. I remember being so afraid of leaving the damn editing desk because I feared forgetting everything. I would have these long periods of time where I would try to do way too much in one sitting, until I got the confidence to get up, go away and come back, go away, come back. I still wrestle with that and I think other people do too. I also know that it's part of something tied to my autism and the ways that my type of mind works. I'm also that way in conversations. It's like I want to deal with it full out and full on. I want to deal with it right now. Because if we walk away from this and come back, something is at risk for disappearing or being lost.

It slows me down. But anyways, to come back to this book idea…

I've watched all of Wenders' films and have realized he also has had to deal with translation in a range of forms. I have a collection of his films. Wings of Desire is probably one of the most beautiful films for me and inspired me to think about how to deal with language–image and silence, subtexts and subtitle. It's just a gorgeous film work in so many ways. I felt that the energy was maintained in the writing and the vulnerability of talking about your biography in your writing, bringing in personal stories was something that's just very inspiring to me. I'm interested in trying to approach what a book project lends itself to and trying to use it as a form to reckon with this fragility– form and translation.

There are three things that I want to share during my time here, one is about crying in the back room of punk (or punk adjacent) shows. I deal with sensory issues and try to avoid engagements in loud spaces for the most part these days, but oddly I have this fascination with being annihilated or leveled by sound and have only ever found this feeling in the punk scene which I was deeply invested in when I was a young adult. I'll talk about two instances where I felt this leveling thing happened - one when I attended my first Death Grips show, and another that happened literally two weeks ago at an Injury Reserve concert in the basement of the First Unitarian Church in Philadelphia. It makes me cry every single time.

I'm going to share my experience of trying to finish this feature length script that I abandoned well over a decade ago. I'm thirty pages shy of finishing the first draft which will be premiering as an object within my Prospect New Orleans exhibition in Nov. It's titled Play Me Home, it started to materialize in 2008 and when I started to kind of go for it in 2011 as my first feature length work, I kind of broke down and felt like I couldn't write anymore because of how sad the story was and the fact that I completely fell out of love with the film industry during that time. I picked it back up at the end of 2019.

The last thing I will share is a short piece that I wrote at the top of the year that was commissioned but never published, titled An Explosive Charge, where I reckon with the idea of the Black figure, the architecture of kink, and the refusal of the silhouette. This will serve as a bit of the core for an installation-based work that will debut in 2022.

These will be excerpts as I must save the best parts for this unpublished book thing, but I'm going to share here as motivation to get this thing rolling. 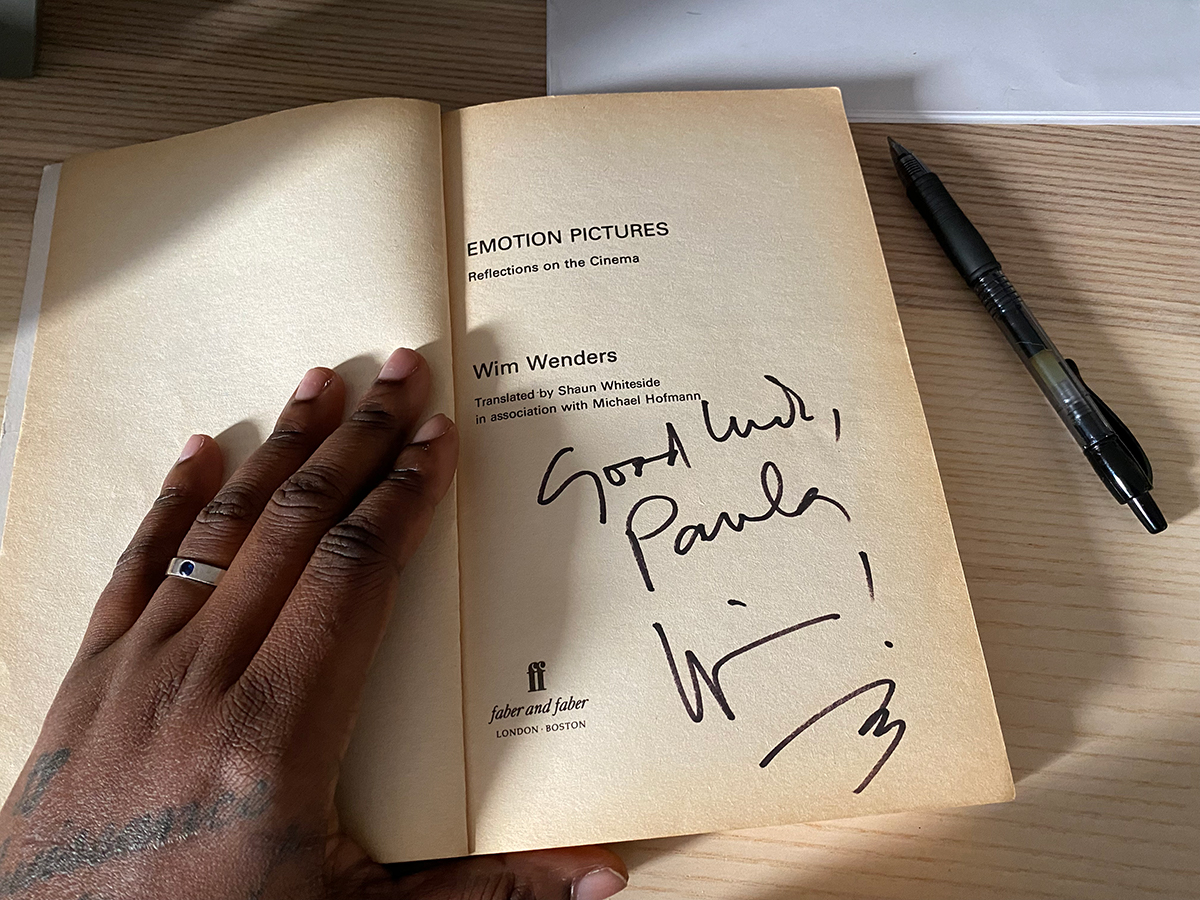